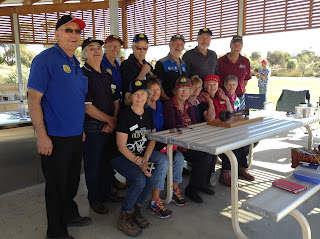 Club Memorabilia Night "Thanks for the Memories" 2016 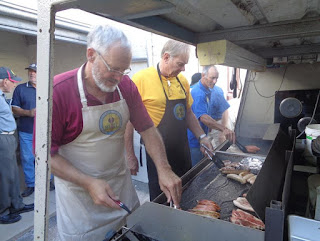 Accompanying this story is a photo of Matt Rowett and his brilliant HQ Holden Monaro, Matt’s standing with his four children. This photo is pertinent because at the club meeting prior to the Show it was raised that modified  vehicles should be allowed in the club. As the debate on this began to flourish among the members present it was raised by a senior long term committee man that modified vehicle were already allowed in the club, had been accepted into the club previously and that what seems to have happened over the last few years is that everyone has become so obsessed with Historic Conditional Registration and with these vehicle having to be bog stock standard, that people have forgotten that modified vehicles are still legal in SA, are allowed on our roads and are not in any way banned or even discouraged in our Constitution; they simply cannot get  Conditional Rego.      This discussion on the night of the meeting arose because Matt was at the meeting and was keen to join in with a group of like minded automobile enthusiasts and to bring his family with us on picnics and runs and outings and all manner of BVRC social gatherings...and isn’t that what a club is all about? Hope you’ve joined by the time this issue hits the membership Matt. 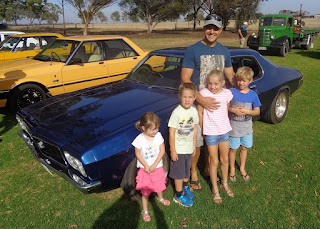 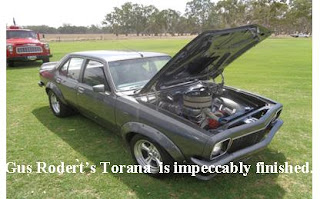 Matt Rowett and his children and his HQ Holden Monaro

10 a.m. until the conclusion of the Grand Parade at 3 p.m.
That was the attendance required of our club members who took up the offer of free entry into the Mundulla Show for our classic vehicles. At the time I have to admit I wondered if that almost full day was just a wee bit too long for my equestrian addled attention span. And then it was all made much worse when Helen informed me she wanted to be at the Show before the start of the harness carriage driving at 9 am. It looked like it was going to be a looong day.
Funny how things turn out though because time simply flew; so much to see, so many folk to chat to – including super friendly and chatty local and State politicians who sought me out not visa-versa and this being despite too, my not having a baby to kiss – food and drink, and then suddenly it was oops, better hurry over to Lucille and get the gal packed up ‘n’ cranked up and in line for the Grand Parade; which was longer this year than a WA iron ore freight train and that saw cars coming off the oval after their regal lap as other vehicles were still driving onto the grass. Lap completed and after quickly parking Lucy.
Once again it was time to scurry down to the ‘swamp’ to watch the whip-cracking heats for the Stockman’s Challenge. Not sure what time we finally left that day but clearly a time frame of 10 a.m. until 3 p.m. hadn’t been anything to worry about and I wasn’t the only one from the club who stayed on after the parade either. 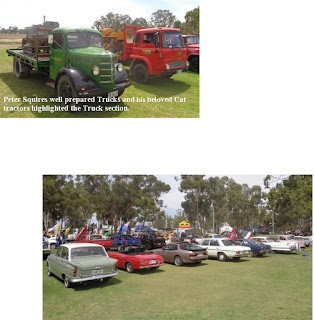 Overall it was terrific to see so many wonderful and diverse club vehicles turn out for the Show, sedans, utes, sports cars, motor cycles, trucks and tractors, we certainly provided a bit of everything for sure and it was great that our cars were parked with the very well attended ute muster vehicles too; it made for a mighty fine spectacle which was just as well considering the presence of the ABC TV film crew loitering around all day filming an entire episode of the popular Back Roads series.