The 1928 Essex, now owned by Gordon Creaser and known as Alfie, was owned and restored by his older brother Ken. The following story is a copy of the article written by Ken which was printed in the Bordertown Vehicle Restorers Club's 26th Newsletter in June/July, 1988, and reprinted in the 86th Newsletter in October/November 2002.

'In 1974, Mr McLellan gave my brother Gordon an old car, and Gordon asked me if he could put it on my block, as he had no room for it at home. I gave him the OK. The following weekend he turned up with a trailer load of rubbish, which turned out to be the old car, an Essex.

Rubbish was the best way to describe it, as it had no radiator or side lights, the doors were off, and the whole body had rusted out at the bottom from about 9" up. All the woodwork had rotted out - including the wheel spokes, and there were not tyres or rims.

It lay on the block for more than a year. I (Ken) then asked Gordon what he intended to do with it, as I thought I'd have a go at restoring it. He told me I could have it. So, on December 20, 1975, I made a start on the restoration.

First, to a going chassis, which I tested by driving around in the block - but that wasn't good enough for Gordon - he had to take it onto the road. Up Green Street he tore, and back again, changing through the gears. OK was the verdict.

I then made a start on the body work, followed by the painting which was applied by brush and taking 30 odd coats of paint.

When the body was completed, it was bolted to the chassis and the seats and interior were upholstered.

Then came the hood. I found that to be the biggest challenge of all - it really tried out my patience.

After completing the restoration, which was done over a period of 11 years, I made enquiries to try to find some history of the car. The first approach was then Jenny Marshall (nee McLellan), who got in contact with her brother. He found that Mr O. Merrit had lived on their property for a short time and had left the car there. Jenny made further enquiries to Mr Lionel Merrett, and found that O. Merritt now lived at Aldinga Beach. I wrote to him and learned that he had bought it from Lionel Hutchings of Wolseley in 1952. Mr Hutchings had bought it for the Ford V8 engine which was in it at the time. Mr O. Merritt put the original Essex engine back, and used it until 1955. It is believed that Mr Hutchings bought the car from Mr Albert Williams of Lillimur (Victoria), who had installed the V8 engine.

The following note was added to the 1988 Newsletter article by the then editor, Geoff McRae and printer Jeff Holly:

'Ken, I think you deserve a lot of credit for your achievement. It is believed that you made all the woodwork by hand, which included the spokes. Did all the metalwork except a small bit of welding. All the upholstery using a treadle sewing machine - and the hood too. And it is all right for people to say "Oh yes, we put on 30 coats of paint too." BUT BY HAND? The mind boggles. All that rubbing back. An excellent effort.'

The following note was added by the editor, Kathy Creaser, in the 2002 reprint:

Gordon and Kathy bought the car two years ago (2000), after Ken suffered a stroke and was hospitalised at the Bordertown Memorial Hospital.

They have been on a couple of outings in it. The paintwork and upholstery are still as good as ever, a real work of art. Gordon hopes to do some work on it in the near future as it has developed a knock. Sounds bad, but it hasn't let us down yet.

The second 4 Clubs Rally was hosted by the Bordertown Vehicle Restorers Club on August 24 and 25, 2002. 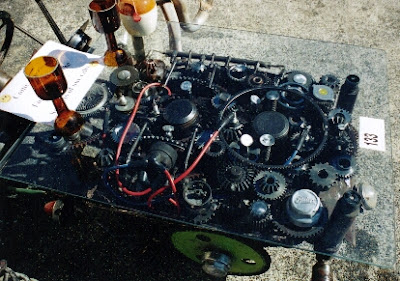 Ninety-one attended, and several hundred dollars were raised for the club thanks to Jeff Creaser's donation of hand painted saws. Congratulations also to John O'Brien on his winning Junk Art (pictured above)!

Thank you for contributions by Ray Phelps and Gordon Creaser