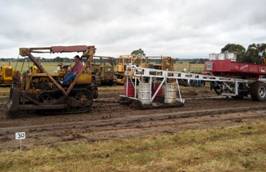 We started in the morning a little damp after overnight rain. The track was a bit heavy for the under 20hp rubber tyred tractors. The pull crew decided to go on with crawler tractors which would dry the track out for later in the day. Well, THAT was the thought!!! 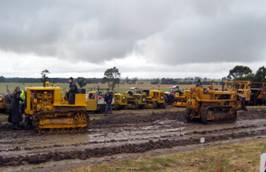 However, down came the best shower of rain the district has had for four or five years, water everywhere. It was decided to carry on with the crawlers, but the track was so cut up and slippery the drivers could not stop them. Mud everywhere. But they seemed to enjoy the challenge. 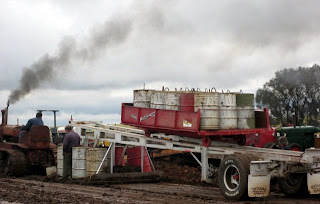 The track improved after grading etc - then more rain and that was the trend for the rest of the day. Things were really bad - with the sled slipping everywhere and almost running on and hitting the Pull Back Tractor. Having some trouble with not enough weights for the sled, the operators left the Pull Back Tractor hooked up to create more drag. They even had to put the blade down at times.
Most of the crawler tractors competed, and then the steel wheeled tractors had a go, but it was much too wet for any of the rubber tyred wheel tractors. 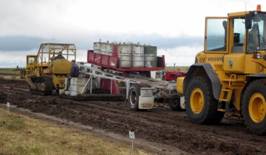 Although everyone got wet, the day was enjoyed by all - and the spectators were given plenty to look at. There were a record number of entrants, some coming from Adelaide, Jabuck, Naracoorte, Padthaway, Coonalpyn, and visitors from Horsham and Portland. Trophies were presented to the various class winners. The Lions Club did a marvellous job with the catering, and thanks to all other helpers.

The Car Club supplied gate keepers, and after the $200 guaranteed to the Lions Club and the $100 to pay the Merry-Go-Round we ended up with approximately $170. Of note that the following weekend they held another day for the rubber tyred tractors and Club member Ray Phelps gained a prize. Editor.