Trip to Biloela for NHMA Rally.


After getting past Tintinara, (see - you were all wrong I wasn't thrown off), we travelled to our first stop which was Pt Augusta. Here Holly "lost" his wallet causing some consternation. Pausing at Quorn to view a steam train in the old railway station.

Things were getting dryer by now the further north we went, at last passing out of the grain growing areas. Noted Castor Oil plants at 1863 Kanyaka ruins and the start of Cattle Grids in the road with lignum-, blue- and salt-bush. Cattle prevailed here, and the next stop was Marree, after passing through Parachilna, Leigh Creek (Copley), and Lyndhurst. Copley open cut was large as was the associated machinery. At Farina we looked at derelict buildings. Then on to Marree - old pub, community bathrooms, and meals too large.
Bare country after Marree. Noted a couple of signs - "Rural Watch" - not a building in sight and "No Admittance" - to what?? Shining gibber plains off into the distant sandhills. Also saw the first Mesas and Mirages.
Mungerannie for lunch - all lunches consist of make-your-own sandwiches. Here saw brolgas, black duck, daddles duck underfoot cadging food, and water hens. Hit my head on a tree branch - was quiet for five minutes. Talked to some travellers returning (eventually) to Ceduna. On through sandy desert both sides of the track to the Border gate 12km before camping at Birdsville. Saw museum and later Waddi Trees Acacia peuce (rare). Head to Boulia for the night - warm, cloudless sky, gibbers and low bushes with native grasses. Some bitumen road. Saw many steaming artesian bores from here on. Across King River and speeding on our way to Bedourie. Great cattle feed and fat cattle. What drought? Single phase power lines and eagles appear. 10km to Boulia. Bus quiet, most people reading, watching roadsides or nodding. Did a bit of all this myself in between talking to seat mate. Boulia - tea, shower, rest.
Up early, went for walk and saw Brolgas marching around the streets quite tame. Dickie purchased a camel here. Saw "Min Min" light show. The bus bobbing, swaying, lurching and weaving along the track towards Winton. Visited Interpretive Centre good display of all sorts of stuff mostly not restored and missing parts. Gidgee trees here - pale foliage, dark trunks. Many dead kangaroos on roadside with attendant wedgetail eagles. To Longreach overnight, warm and sunny on way to Hall of Fame. Photos of Qantas 747 and 707. 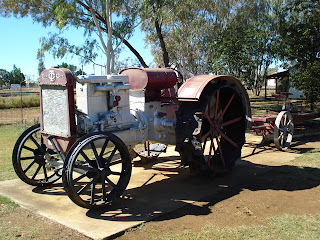 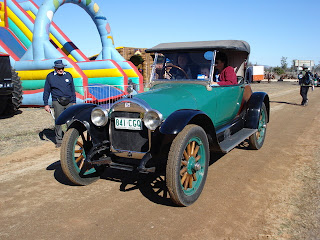 Early Buick
Started to see the odd "Queenslander" style houses on stilts here. Hall of Fame good and interesting but very commercial - as it should be, to be self supporting. On to Illfracombe where there was a long row of implements and vehicles along side the main street, photographed many. It must have rained here recently as the emerald green grass in showing under the dried clumps of Mitchell grass. Buckbush = tumbleweed. Anthills abound around the ground.

Trees thicker and more undergrowth among the scrub pines. Saw first prickly pear.
Jericho has the smallest drive-in theatre in the Sthn Hemisphere - 36 cars. To Emerald for Rice a la King with fish. Left motel earely next morning and returned to the gemfields where we panned some chips of sapphire, zircon and topaz. Brian Knauerhase found a cuttable stone. More and different trees - Brigalow, Blackbutt and Ironbarks. Stockfood plantings along roads - this is American import of Leucaena leucocephala or the White Lead tree. Problems with clutch on bus manifested themselves about here, and continued until we left for the trip south, necessitating replacement of master and slave cylinders. 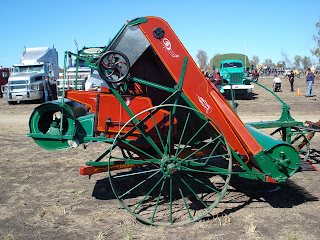 1915 +
T-bone (large) with veges followed by B&B pudding for tea. Next day Rally. Picked up exhibitors bag and my new cap and badges. What can I say about the rally? Better than Naracoorte in that te different machinery was closer together. May have been more engines, but not sure about tractors. Lots of old machinery too. Draught horses and steam engines, vintage cars and trucks. Very large number of craft displays. Saw many people I had only corresponded with for many years. Returned following day and left early, back to Banana to do washing and drying. More food. Food and rooms very good generally.
Lost a further two hours with blocked rubber hose to clutch cylinder. Dickie organised shopping trip (or so he claimed). To Dalby for overnight stop. Visited Jondaryn on way to Toowoomba. Different crops here - sorghum, maize, peanuts, cereals and vegetables, showing that more rain had fallen, and was Parkes
still piddling down. Millmerran to Goondiwindi boring. Read book. Seat by self today - not cramped. At Moree for tea, chicken roast. Crook throat, blood sugar 17.5, not happy. Visited Cotton
Centre on way to West Wyalong, had to leave due to coughing fit, stopped talking (almost). Downwards, ever downwards. To Parkes and the Dish. On through Forbes. Tea fish and chips. To bed early, but throat a bit better. Mallee scrub now. Quiet roads compared to previous days. Very few stock but much grain planted. Then on to Deniliquin and a full days trip home through familiar country. Good trip.